He sat opposite her, smiling, beautiful, perfect. He knew all this, her features oh so familiar but why was it he felt so strongly but only recognised her. He could swear he'd felt this way about her for so long but as he watched her eat he was confused... why her? Who was she really?

Without control, he put down his knife and fork and stepped out from his seat, smiling as he walked around to her. She frowned as he took her hand but stood anyway. What was he doing? He got down on one knee, taking out a small box from inside his jacket and revealing a ring. Her hands immediately rushed to her face in utter joy and slight embarrassment but she nodded wordlessly. He beamed proudly as he took the ring from the box and slid it onto her finger. Words couldn't express what he was feeling.... mostly confusion.... What in the hell was going on and why was he doing this. Who was she? She seemed so familiar but he barely knew her at the same time.

He stood, still holding the hand with the ring on her finger. The diamond and sapphires gleamed in the dull light. She stared into his eyes as he leaned down and kissed her knuckles, graciously. She turned bright red as he pampered her silently... Why were neither of them speaking? Nothing was adding up, he just knew he cared about her more than anything. But who was she and why?

She stepped closer to him, a little shorter than he, even in those heels. Her hands reached up and cupped his jaw and she giggled in complete silence. Leaning up on her tiptoes, she kissed him softly as he placed his hands on her hips. The silence added to the way he felt her... or did it? It also added to his concern... there was an open fire, but even that made no sound, He kissed her back, softly at first but then more and more deeply. Suddenly, he felt his hunger for her. His inner concern switched. In sheer panic he willed himself not to do it, he clearly loved this woman.... Don't do it!

He couldn't help himself. He swung her round and leaned her over, looking into her eyes as she smiled up at him. He smiled back, a deadly, fanged grin. Her smile disappeared almost instantly but she was not quick enough to stop him. He feasted heartily as she gripped onto him in desperation. Eventually, she went limp and he had to cradle her completely. His mouth was covered in her blood as her last breaths seeped from hers... what had he done!?

Suddenly he sat bolt upright in his bed, it was pitch black in his room. He leaned back in relief, wiping his face before speaking "What the fuck was that?" Who was she? What did that mean? It all seemed so distant but the look of horror on her face as his expression changed was imprinted on his mind. 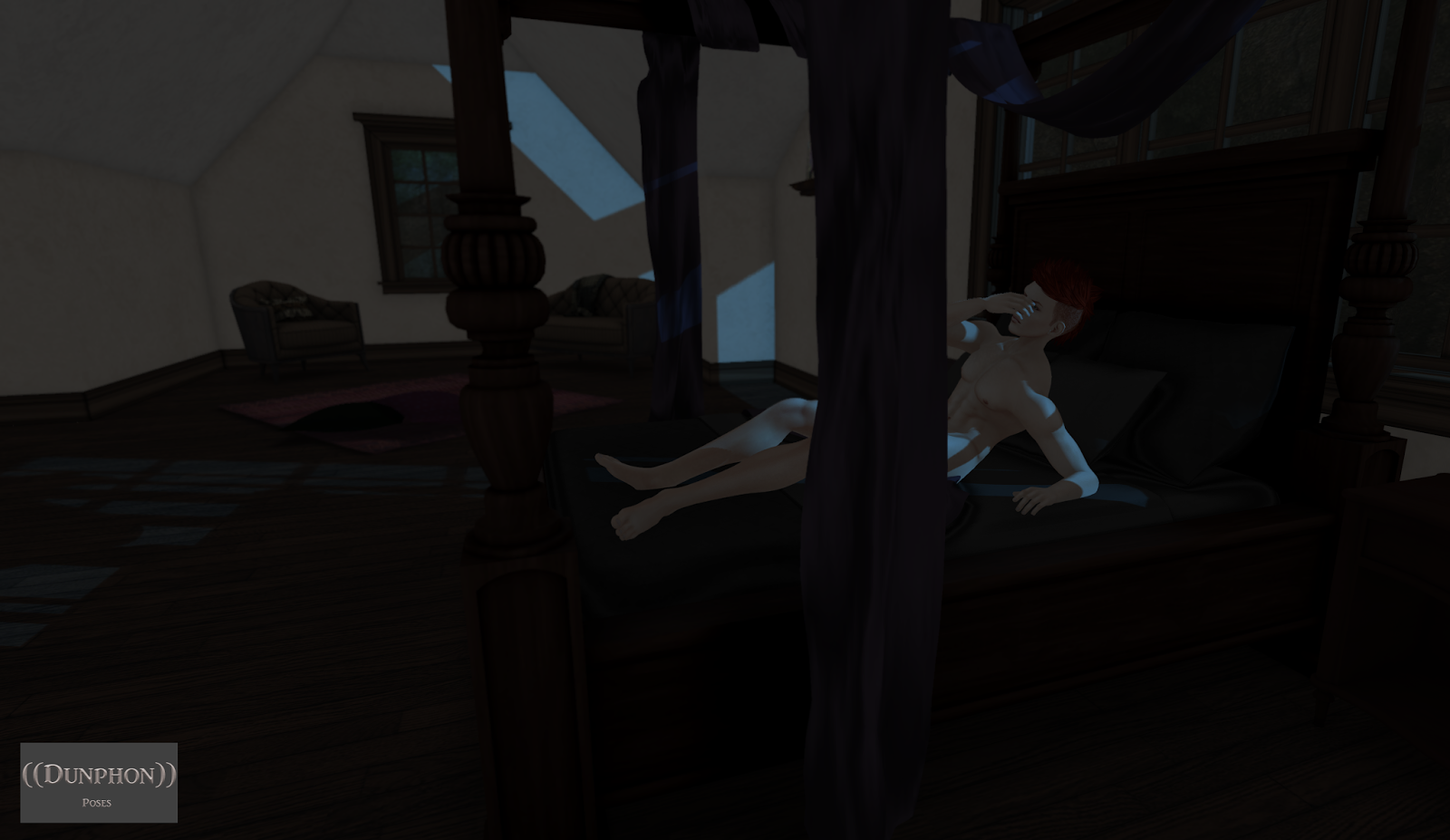 All poses by ((Dunphon)) Poses

Many thanks to a very special friend for taking part in these images.
Posted by Unknown at 03:25